My weekdays may be filled with snips and snails and puppy-dog tails, but it’s not all work and no play for us volunteers in Lima.  One of our favorite areas to explore and indulge is Miraflores, an upscale district on the coast of Lima.

Miraflores is well-groomed and tourist-friendly.  There are walking and jogging paths, fountains, statues, parks, cafes, bars, theaters, shops, surfers, paragliders, skaters, and more.  It’s a sharp contrast to my working week in Villa El Salvador, but I don’t judge Miraflores for its touristic pleasantries.  There is still a wealth of quirky charms within this district worth discovering.

Strolling toward the beach from the cliff top

Miraflores sits on a cliff top overlooking the ocean, and the walk down to the water is a beautiful one.  The steps are steep and uneven in parts, but flanked by dripping green foliage and palm trees.  After making our way down to the beach on our first weekend in Lima, we were met by “Surfer Johnny,” an overly animated surfing instructor with blonde-tipped hair and a curious hint of California in his accent.  He (somewhat convincingly) told us that we just had to come and take surfing lessons with him.  I took his card, much to the amusement of my fellow walk-mates, although I haven’t called him for lessons.  Yet.

Back up on the clifftop, there is a modern shopping mall called Larcomar which is frequented by gringos and Peruvians with dollars (or rather, soles) to burn.  There is a Chili’s to my dismay, but also a few nice cafes and restaurants with ocean views worth enjoying. 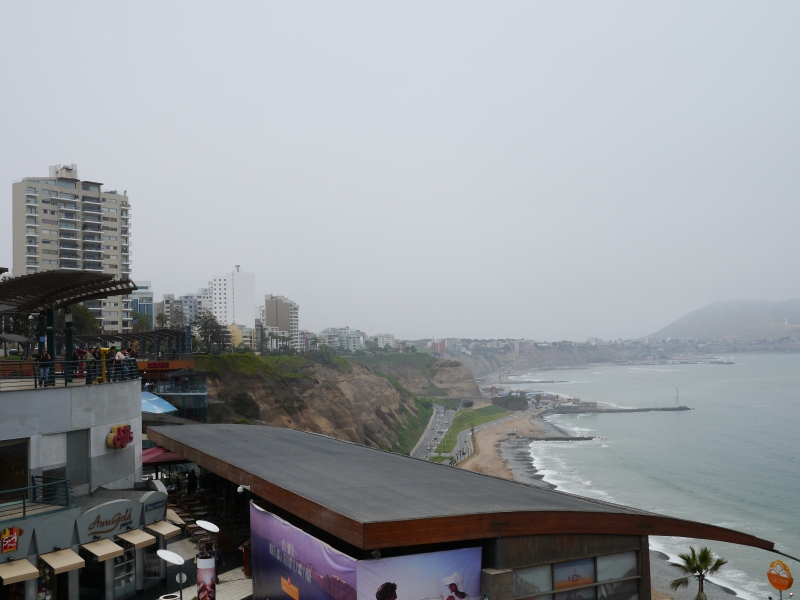 A park next to Larcomar Mall overlooking the coast 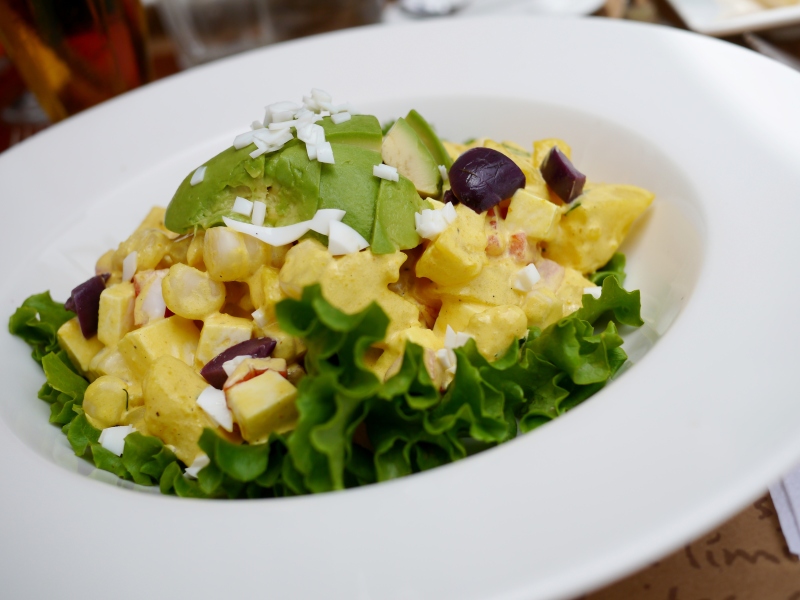 Down the street in commercial Miraflores, Parque Kennedy provides a small triangular patch of green amid a McDonalds, department stores, and lots of bars and restaurants.  Fellow volunteer and roommate Romana invited me to join her for a walk in the park to visit the many cats that live there.  Apparently they were once pets abandoned by owners who could no longer care for them (although I also heard a contrary story that there was a mouse/rat infestation problem in this part of town, and the cats were the creative solution).  Now, you can find dozens of friendly, seemingly healthy kitties roaming the park and willing to play at all times.  And yes, I am aware that this brings me one step closer to being the creepy cat lady.

A sleeping cat in Parque Kennedy. One of many.

When the sun sets in Lima, the fun doesn’t stop (at least until the sun comes back up again).  On my first Friday night here, I ventured out with the other young ladies of the house (and the lone gentleman) to meet a Limeña friend of a friend of said gentleman for a night out on the town.  On our way, our cab was stopped dead by throngs of chanting people.  We’d forgotten to calculate a futbol game into our plans.  Perú had beaten Paraguay in the Copa America, and Miraflores was buzzing and pounding and honking in celebration.  We abandoned the futile taxi cab and stood on the sidewalk watching the happy mayhem.  Within a few minutes, a microphone was shoved at my face.

“Where are you from?!” someone yelled.

“Estados Unidos!!  Yeaa!  Take this and jump!”  A giant Peruvian flag was pushed into our hands and we began hopping and somewhat timidly chanting, “Perú! Perú!” in front of what we realized was a news crew and camera.  Our first Peruvian TV debut took less than a week, and we could not have looked more awkward if we’d tried.

A week later in Miraflores, I found crowds of a different sort.  Instead of cheering for futbol, they were chanting for… The Biebs.  Yes, I’m afraid it’s true.  Resistance is futile.  Justin Bieber is everywhere.  Hoards of young women were camping out, waiting on the prospect of his arrival at the Marriott, without much certainty as to when (or if at all) he would get there.  Every time any car pulled up, the crowd roared for some confused businessman or tourist, and then died down in disappointment when they realized it was not a seventeen year-old boy with side-bangs and waxed eyebrows.

Such is Miraflores.  It’s fun, it’s touristy, sometimes it’s cliche, but it’s a piece of Lima that I can’t overlook.  As long as it keeps rewarding me with memorable experiences, I’ll keep visiting.