It’s no secret that I’m obsessed with Russia. Ever since my parents brought home a CD from a random Russian folk band they heard at a local Irish bar when I was eight, I’ve been hooked. I love the sounds of the language, especially the sexy “zh” that we lack in English. I love Orthodox churches with their colorful onion domes and gilded iconography. I love the Bond villains.  Borscht is my favorite soup.  And yes, I like vodka on occasion.

That’s not to say that I always like what Russia does, nor that I understand her.  In fact, most of the long arc of my interest in Russia has been an evolution toward deeper confusion and, accordingly, fascination.

So when it was time to choose a major (or as Harvard likes to call it, concentration) in college, I went with my first intuition: Russian Studies. That lasted about six months, or until I started having panic attacks about how on earth I would get a summer internship with a humanities major. Despite switching over to the Economics department, I continued taking Russian language and literature courses, and adored them all.

Russia was the most natural choice of all the places I decided to travel this year.  In fact, it was the first one that I planned, over a year in advance.  And that is how I now find myself drinking green tea in a cafe in downtown Yaroslavl.

I’m here to do more than drink chai, of course.  I’m volunteering once again with Cross Cultural Solutions.  Visit the website.  Pick a country.  And go.  Seriously.

In the middle of my first week here, as I struggled with jetlag and insomnia and geeky excitement about finally really being here, Russia celebrated День Победы (Victory Day) on May 9.  This national holiday commemorates the end of World War II, or more specifically, Russia’s involvement (Великая Отечественная Война, or the Great Patriotic War, as it is called here).

The war still casts an enormous shadow on the country.  How could it not?  As many as 20 million lives were lost.  Twenty million people.  That was 14% of the population of the U.S.S.R. at the time, and the majority of the deaths were civilian.  To put that in perspective, imagine 40 million Americans dying in a war on our own territory.  It’s unfathomable.

Much like major national holidays in the United States, the television networks in Russia played historical specials about the war throughout the day.  News programs showed interviews with white-haired ladies in their eighties talking about what it was like to live through the turmoil of the war.  Putin, freshly re-inaugurated two days before, made his requisite appearances and speeches.

The parade  in Yaroslavl was scheduled to begin at 10 am. Thousands of people lined the streets holding red carnations and wearing orange and black striped ribbons. A teenage girl handed me one of each on my way to the parade route, so I tied the ribbon around the strap of my purse and carried the flower in my hand.

We waited (and waited, and waited). It began to rain, and umbrellas popped open in the crowds. Once the parade finally did begin, no one could see it anyway. But they all stayed, kids in tote. A live marching band played music that was grand and inspiring and seemed very soviet to me. Every once in a while I got a glimpse of a Russian flag or group of soldiers marching by through the umbrella jungle.

After the parade, we sloshed through the wet streets to the memorial of the Great Patriotic War, which I then realized was the destination of all of those red carnations.

Babushka at the parade

Soldiers marching past the Church of St. Elijah the Prophet 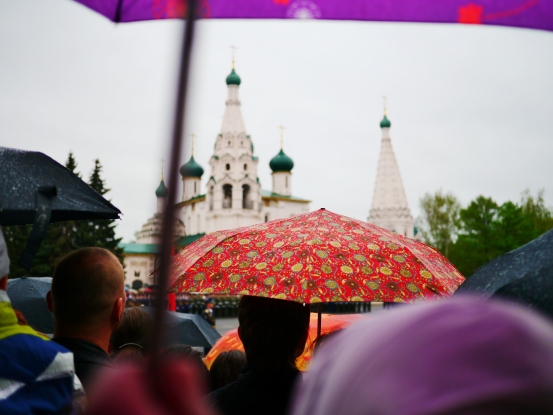 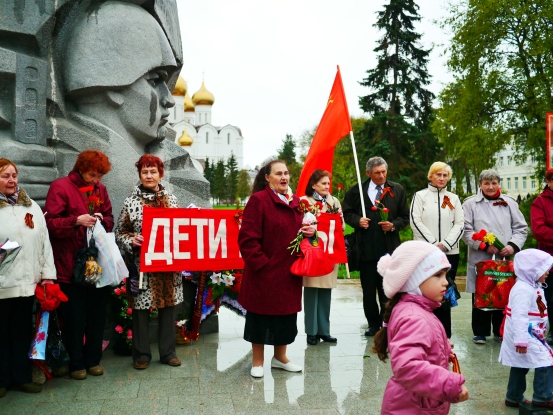 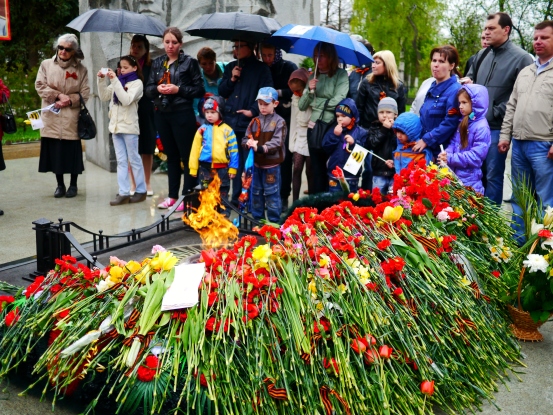 We spent the rest of the afternoon at the Yaroslavl Icon Museum, learning about the evolution of Orthodox Christian icons in Russia through the centuries.  The history of Eastern Orthodoxy is Russia is fascinating and deserving of another post altogether.  For now, I’ll share some of the beautiful colors and images we saw that day.

I have plenty of stories to share regarding my volunteer work here, my adventures re-learning the Russian language, and about the city of Yaroslavl in general.  But my tea has run out, and therefore so has my wifi mooching for today. Пока!