This past Saturday was Dyen Goroda (Day of the City) in Yaroslavl, a day devoted to celebrating this historic town and the people in it.  I needed this holiday.  After hearing about my friends and family enjoying Memorial Day weekend back home in the States, I felt nostalgic for barbecues, sunshine, flip flops, and flags.  And on Dyen Goroda, I got the best Russian version I could have hoped for.

I set off alone from my apartment to the city center in the early afternoon, donning the first sundress I’ve worn yet in Russia thanks to the (finally) warm temperatures and cloudless sky.  I stood at the bus stop for about ten minutes, longer than I’d ever had to wait before.  A bus finally appeared, but as the doors opened, disgruntled bodies that had been tightly pressed against the walls bubbled out the doorway.  A very frustrated boy who looked like his face had been smushed up against a window for the last half hour shouted very definitively to us: “There’s NO space!  No space at all!” and waved us off.  The doors shut again and the sardine people were packed ever tighter as the bus took off toward the center.

I stared left and then right down the street, pondering my next move.  A man with Asian features approached me and said something to me about the buses in fast, accented Russian.

“Ahhh where are you from?”

“Seriously?!”  He flashed a big smile, showing two gold teeth on the left side of his mouth.  “But you look so Russian!”

We got to talking about how they had moved to Yaroslavl from Kyrgyzstan a few years ago.  Amid discussing the civil war in their home country, we decided that we all might as well walk to the town center, since the buses were all full.  They asked me the standard gammit of questions.  What’s your name?  What are you doing here?  Are you married?  The last question irks me most, not in the righteous feminist way that it ought to, but rather that I now look old enough that people think I should be married.  Oh, vanity.

I explained to them that I was here as a volunteer, working with children and the elderly.

“Oh that’s nice.  So do they pay you in dollars or in rubles?”

We finally reached a bus stop near the center of the city, and they kindly said goodbye and wished me all the best.  I thanked them for showing me the way by foot and waved goodbye.  I wondered if they felt bad for me, unmarried and unemployed as I was.

I could tell as soon as I approached the city center that it was going to be a colorful day.  Huge clusters of balloons floated above crowds of people.  Children ran around wearing neon sunglasses and eating drippy icecream pops.  I could hear live music playing and tipsy teenagers laughing.  I wandered around for hours, people-watching and snapping photos.

One of so many adorable children on Dyen Goroda

In front of the Church of St. Elijah the Prophet, a young troupe of dancers was performing traditional Russian dances on a stage.  Tiny adoring fans watched from below and danced along. 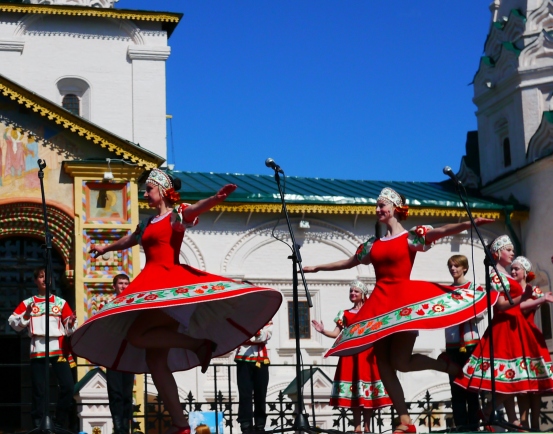 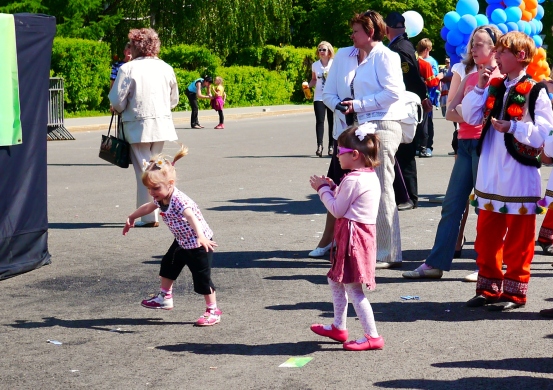 The stage was surrounded by little munchkins doing their own versions of the traditional dances.

The city smelled of hotdogs and funnel cake and beer.  If I closed my eyes, I felt like I was home for the Fourth of July.  Boardwalk-style games (if primitive ones) were set up in parks all around the city:  pop the balloons with darts, knock down the tower of cups with a baseball, hold a pull-up for X number of minutes, etc.

As I was taking photos, a group of young men yelled out, “Hey girl!  Come take our picture!”  Eager to document what the inebriated youth of Yaroslavl look like on Dyen Goroda, I obliged.  They also wanted to take a picture with me and ask all sorts of questions about New York.

Me and rando Russian. Awkward photo, yes, but the only one I took of myself that day, and I happen to like the dress I was wearing. So here you have it.

Some of the things being sold on Dyen Goroda. Neon wigs and Scream masks seemed to be very popular.

One of the most beautiful discoveries I made while walking around the city was the collection of “love locks” along the embankment of the river.  Young couples decorate locks with their names, wedding dates, and other symbols of love and secure them to the embankment fence or along a bridge over the river. 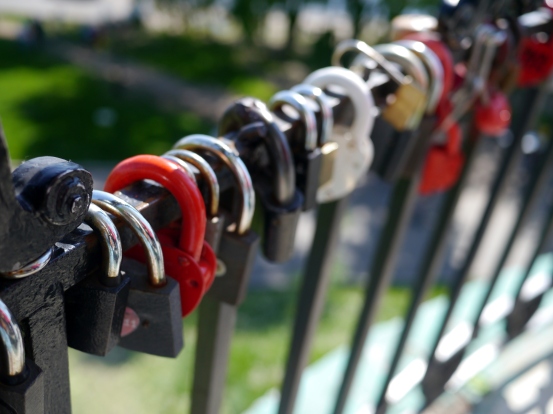 Love locks along the embankment of the Volga River 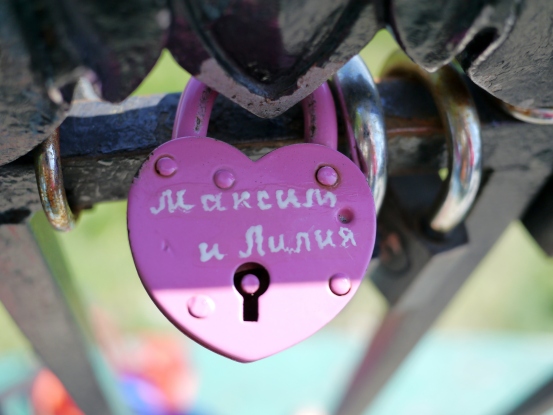 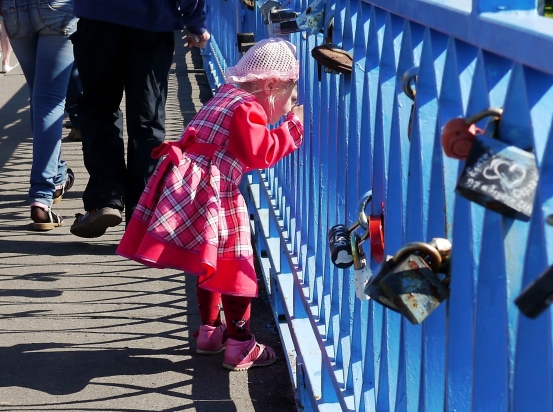 Sort of describes me in Russia right now.

Although my goal was to stay awake late enough to see the fireworks at 11:15 (which is about when the sun sets here these days), I realized I was already pushing the envelope by walking around for six hours with a sore throat and minor fever, and in sandals with heels.  So, I retreated home before the serious partying began.  Later that night, I listened to the fireworks in my bed while munching on chocolate priyaniki (cookies) and sipping tea.  How old am I again?

All in all, the day was a success, despite my sore feet and early bedtime.  I felt grateful to the city for giving me a little bit of my own summer-initiation celebration (although I guess I’ve been living an eternal summer for about a year now).   I fell asleep that night feeling full of sugar and warmth and just a touch sunburnt, turning over all the images and colors of the day in my mind.  Thanks Yaroslavl, and Happy Birthday.