My first supra was disorienting, not least because of the obscene amounts of wine consumed.  Every ten minutes, a man stood up and philosophize on some topic in Georgian or Russian.  Sometimes the other men at the table would stand with him, knowingly instinctively when to speak and when to clink glasses and when to drink.  My wine glass magically filled to the rim every time I turned my head.  People drained clay bowls and goat horns full of wine, occasionally shouting “Gaumarjos!” (“cheers”) in unison.  What seemed like hundreds of plates of food arrived in waves to the table: salads, breads, cheeses, olives, kebabs, khachapuri (cheese pie), fish, beef, and rainbows of fresh fruit.  We staggered home arm in arm in the wee hours of the morning, singing in the streets of Sighnaghi.  I may have still been intoxicated the next morning.

Having survived several supras since then, I’ve come to realize there are unspoken rules that dictate this madness.  There are actually academic papers written on the cultural significance of the supra, exploring such questions as “to what extent does the popular taste for overindulgence amount to a form of compensation and escapism?”  It is a highly ritualized and structured tradition, usually including a standard series of toasts and the same set of national dishes in a particular order.

If you’re planning a trip to Georgia, I highly recommend familiarizing yourself with the rules of the supra first, unless you want to find yourself “literally crawling in the sand in Batumi” (to quote a Hungarian friend on her first supra experience).

1.  The Tamada, or toastmaster, rules the night.  He (99% of the time it’s a “he”) introduces every toast, standing and expounding on some theme with a full glass (or bowl, or horn) of wine in hand. “In principle, at every occasion where wine is to be consumed, even if only two men are present, one of them is selected to be tamada. The ideal tamada should not only be knowledgeable, witty, and articulate, but also a good drinker, i.e. capable of ingesting inordinate amounts of wine (four or five litres is not unusual) without suffering a noticeable degradation of his faculties.” 1

2.  Everyone else follows a particular script (women tend to be exempt from most of this, unless you are a little blonde foreigner at her first supra, in which case you are screwed).  While the Tamada toasts, the other guests raise their glasses, but do not drink. After the Tamada has spoken, the toast continues, usually in a counter-clockwise direction (to the right).  The next guest who wishes to speak stands, raises his glass, elaborates on the theme of the toast, and then drains his glass to the bottom in one gulp.  If a guest does not wish to speak, he or she may drink after hearing some words that resonate for him or her.  Eating is entirely appropriate during toasts, but talking is frowned upon. Once everyone who wishes to speak on the theme has done so, the Tamada proposes a new toast, and the cycle begins again.

3.  Each toast is devoted to a different theme.  The first few follow a prescribed order, before they become more specific to the guests and circumstances of the supra.  Toasts are typically given to God (first), Georgia, family, the mother of God, friendship (between people or nations, if there are foreigners among the guests), mothers, women (“За милых дам”), children, saints, love, beauty, ancestors, etc.  As the night progresses and he runs short on generic toasts, the Tamada gets creative (and drunk).  I once heard a toast against gay marriage at a work function.

4.  The supra is an endurance sport.  Pace yourself, or your stomach, liver, and dignity will not make it through the night.  “Anywhere from three (the absolute minimum, to my knowledge) to three dozen or more rounds of toasts may occur during a single banquet. A typical evening supra in a private home might go on for three or four hours, though banquets lasting from 7 or 8 pm until 3 o’clock or later at night are not at all rare. I once attended a portion of a Georgian wedding banquet held in a posh (by Soviet standards) Moscow hotel, which, I was told, was in its third day.” 1

5.  Prepare to hear a lot about Georgia, her preference in the eyes of God, national identity, mythologies, and history, from the founding of Tbilisi to the origins of Orthodox Christianity.    There is also a friendly undercurrent of competition, whereby the men try to outdo each other with their Georgianness, hospitality, wit, and knowledge of history.  Even the most fantastic stories are presented as fact; they’ve been repeated so many times over the centuries, that they have become truth.  For example:

When God was distributing portions of the world to all the peoples of the earth, the Georgians were having a party and doing some serious drinking. As a result they arrived late and were told by God that all the land had already been distributed. When they replied that they were late only because they had been lifting their glasses in praise of Him, God was pleased and gave the Georgians that part of earth he had been reserving for himself. 2

6.  You will eat so much that your breathing will become restricted.  Then, you will likely dance.  This will be uncomfortable, but the alcohol will keep you numb and giddy.

7.  Plan a defensive strategy for wine-drinking, unless you are ready to compete with Georgian men (not advised).  You will be expected to drink, and publicly called out for it if you don’t.  In order to stay under the radar, lift your glass and drink after every toast, but only sip small amounts.  Otherwise, your neighbors will be refilling your glass faster than you can say “pokhmelye”.  And do not– I repeat, DO NOT– accept chacha under any circumstances, until you are a more experienced supra-er.  You will be under the table before midnight.

8.  When guests leave, the table will be covered in heaping plates of food and pitchers full of wine.  At first, I was horrified by the wastefulness (sometimes I still am), but it’s entirely intentional.  It would be considered distasteful and stingy if guests were not overwhelmed with excessive amounts of food, a sign of poor hospitality (the worst insult a Georgian could ever suffer).

During a supra I attended in Borjomi, friends explained Georgian hospitality with a story that has forever changed my understanding of the word. They told me that the colleague sitting to my left was legendary for his hospitality, citing an example from the war with Russia in 2008.  When Russian tanks were stationed outside of the FINCA branch office in Gori, he brought vodka and food to the Russian soldiers every day, calling them “guests” and welcoming them to Georgia.  But this should in no way be confused with weakness, since “on the battlefield, when they are no longer guests, of course we’d have no problem killing them.”

9.  You might never feel more alive than during your first supra. The warmth and comradery, the wine gifted by God and Georgian soil, the music and laughter and spirituality all create a euphoric buzz, as if this were exactly what humans were put on earth to do.  Supras feel timeless, connecting you with ancestors who performed the same rituals and enjoyed the same pleasures a thousand years ago.

If I had one night to live, I’d spend it throwing the supra of all supras, an outrageous display of love, friendship, food, and wine.  Come to think of it, a form of death does follow every supra:  the hangover you will experience for the next 24 hours.  So enjoy the hedonism while it lasts.  Gaumarjos! 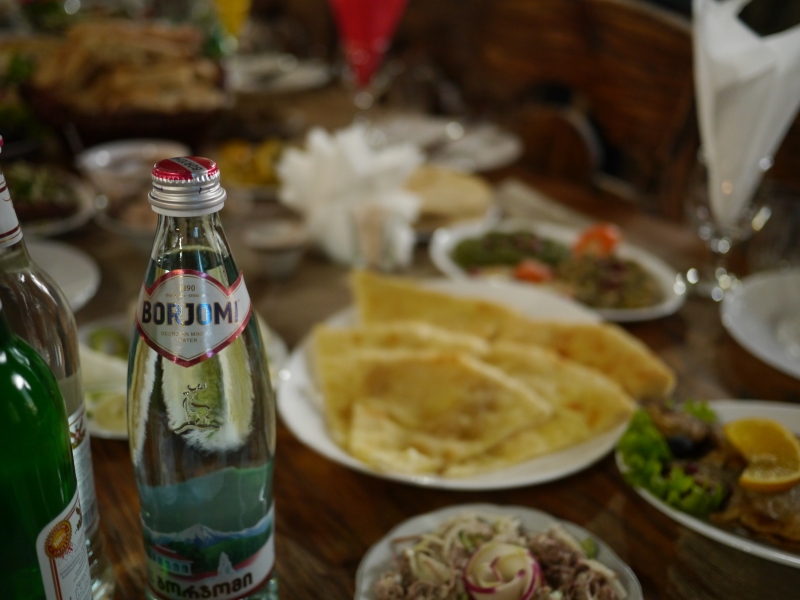 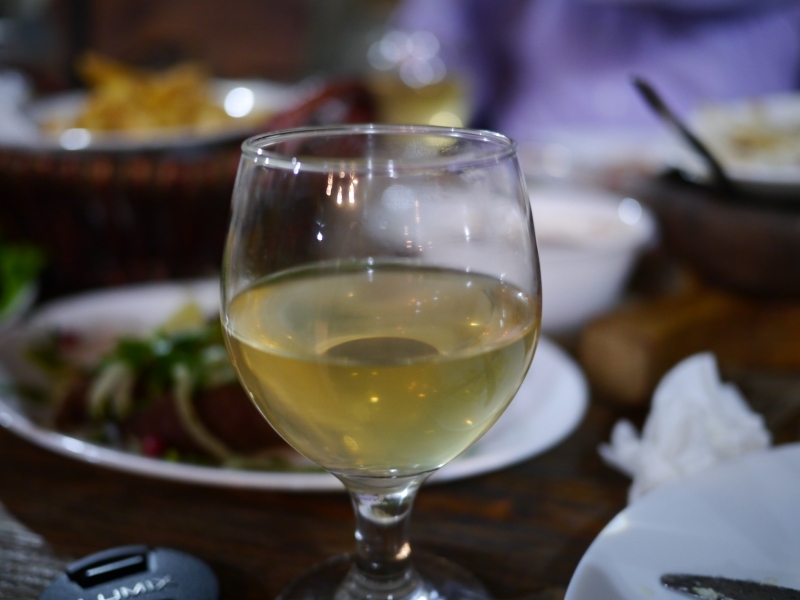 A half-filled glass of homemade white wine, an anomaly in any supra. A few seconds after this photo was taken, the glass was of course filled to the rim. 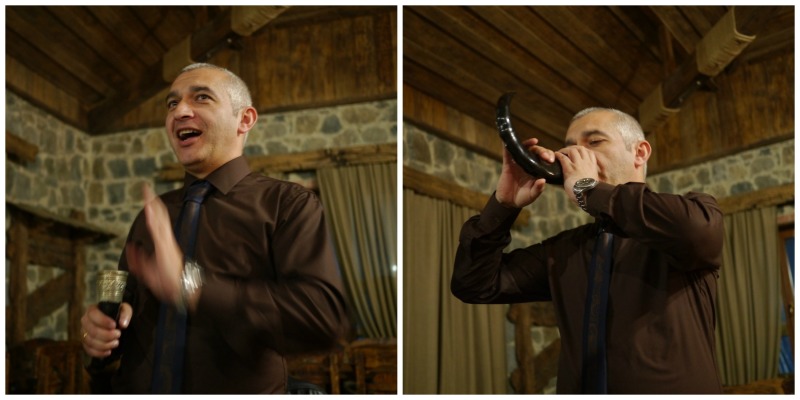 The Tamada, toasting and drinking from a horn. This drinking vessel is reserved for the most important or somber toast of the evening. 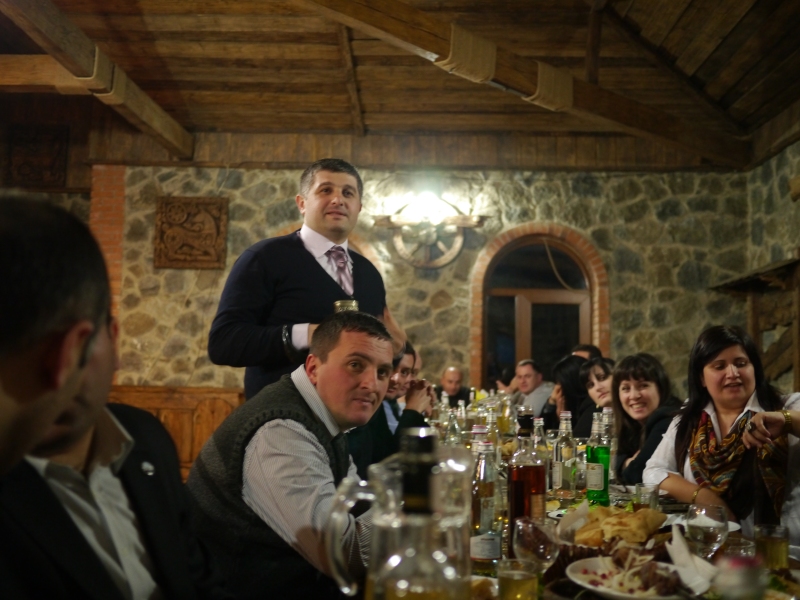 Another guest stands as he listens to the Tamada

Toasts by women are rare. But as the highest ranking manager in the room, it was not unusual for Khatuna to toast. 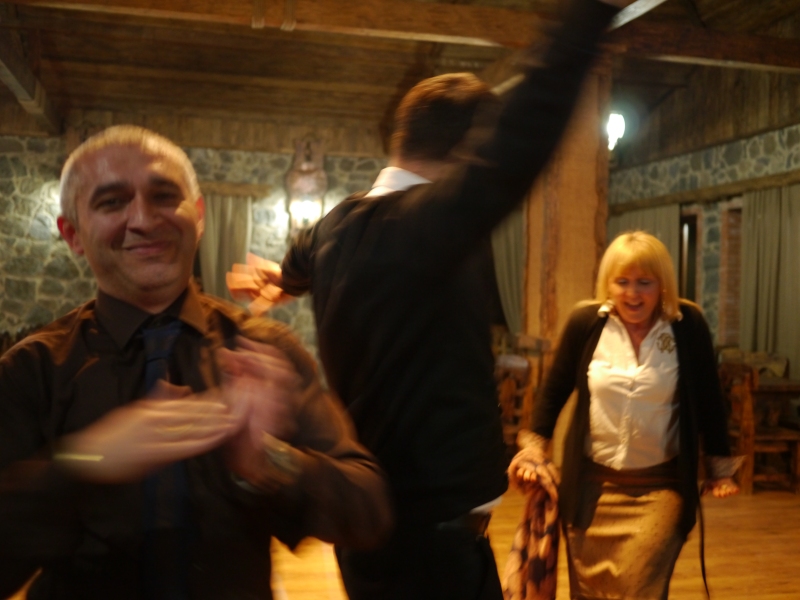 1 from Kevin Tuite, The Autocrat of the Banquet Table: the political and social significance of the Georgian supra

2 from R. Rosen, The Georgian Republic