Word on the street is that my recent blog post about why I moved home was offensive to a lot of people in my previous home, which surprises and saddens me because I didn’t say anything incriminating about Georgia.  Anyone who has followed my blog for the past year knows that I have said a lot more positive things about Georgia than negative.  So, I’m feeling a little stressed and sad these days… again.  What better way is there to relieve stress than baking cookies?  And eating them all?!  (OK, there’s meditation, yoga, running, etc., but that’s just not going to cut it today).

Before I begin my cookie-baking frenzy, I’d like to share with you an interesting Georgian dish a friend made for me.  I may have already mentioned the wonderful and ubiquitous Georgian cheese bread, khachapuri.  I don’t think I ever went more than a few days without eating khachapuri in Georgia.  It’s everywhere.  They use a “Khachapuri Index” as a measure of inflation, for crying out loud.

Khachapuri comes in many regional varieties.  Most often, it’s a round pie of spongy bread filled with salty cheese.  The most common ones I saw were Imeretian and Mingrelian, which look a bit like pizzas without the tomato sauce.  My personal favorite was Adjarian, which is shaped like a boat and filled with thick slabs of butter and an entire egg (or two) floating in a sea of bubbling cheese.  Peep this:

This is Ossetian khachapuri, which looks a lot like Imeretian but also has a potato filling.

You can even get khachapuri-on-a-stick! 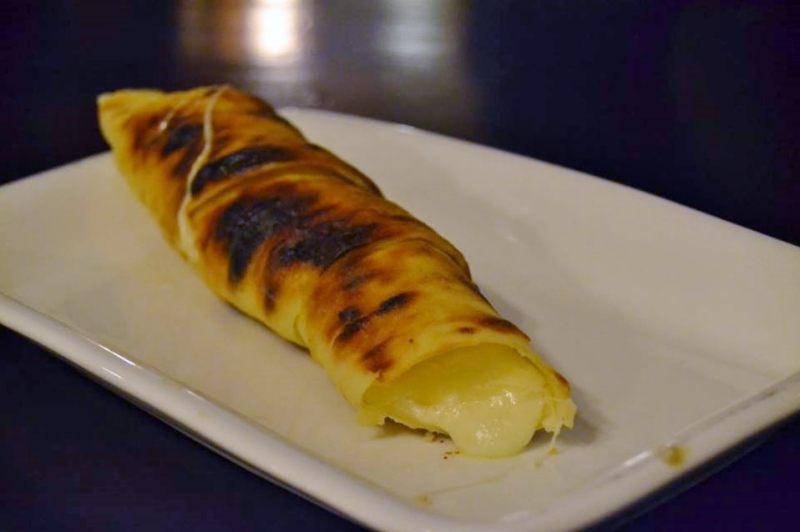 They took out the stick before they served it. I was very disappointed, for the sake of my photos.

When the lovely and gracious Irina offered to show me how to make achma, or Abkhazian khachapuri, a few days before I left Georgia, I was surprised to discover yet another variety and eager to stuff my face with it.  Apparently there is no limitation to what humans can do with cheese, bread, butter, and time.

Abkhazian khachapuri (which may sound familiar if you remember anything about the war with Russia in 2008, which left Georgia lacking two chunks of property along the Russian border:  Abkhazia and South Ossetia) looks like sauceless lasagna.  It tastes like buttery macaroni and cheese stacked in crunchy, gooey layers.  I doubt I could ever recreate this masterpiece, but for my brave and curious readers, I’ll show the process step-by-step.

Sorry in advance for missing details!  I’m working on getting more exact measurements from Irina, which I will add later.

Combine flour, eggs, … and probably some other stuff.  Don’t remember.

3.  The dough will be split into 6 even parts.  Roll one of the sections into a thin layer, one eighth or one quarter of an inch. 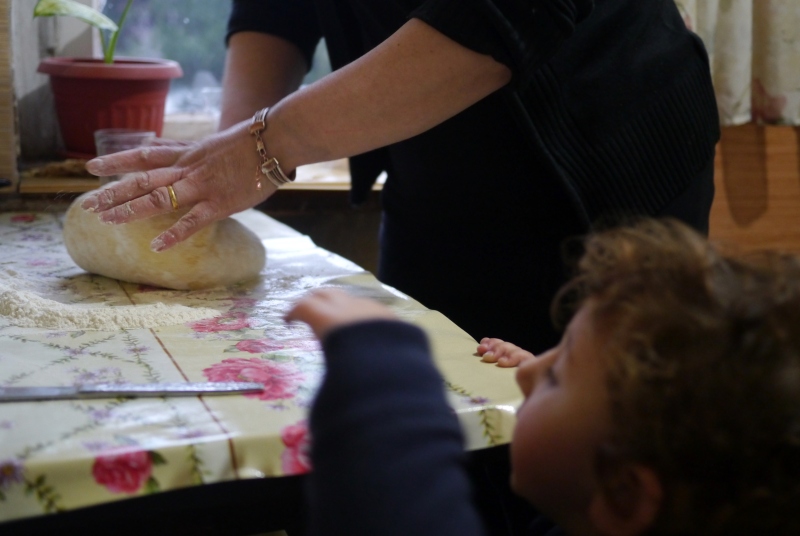 4.  Ok this next part is a lot harder to explain in words than I expected, so bear with me.  Two of these sections of dough are going to serve as the first and last layer of the khachapuri, and will not be boiled.  But the remaining four will be boiled individually, which will give them a pasta-like consistency.

So, press the first layer of dough (un-boiled) into a lasagna pan.  On top of this, brush a healthy coat of melted butter, followed by a layer of shredded cheese (whichever cheese mixture you choose).

5.  Roll out another very thin layer of dough.  Gently drop this layer of dough into a large bowl or pot of boiling water, and let it boil for two minutes.

Then, carefully transfer the boiled sheet of dough to a bowl of ice cold water.

Carefully lay this sheet of dough on a towel and pat dry.  Then, lay it onto the khachapuri, and follow with another coat of melted butter and shredded cheese. 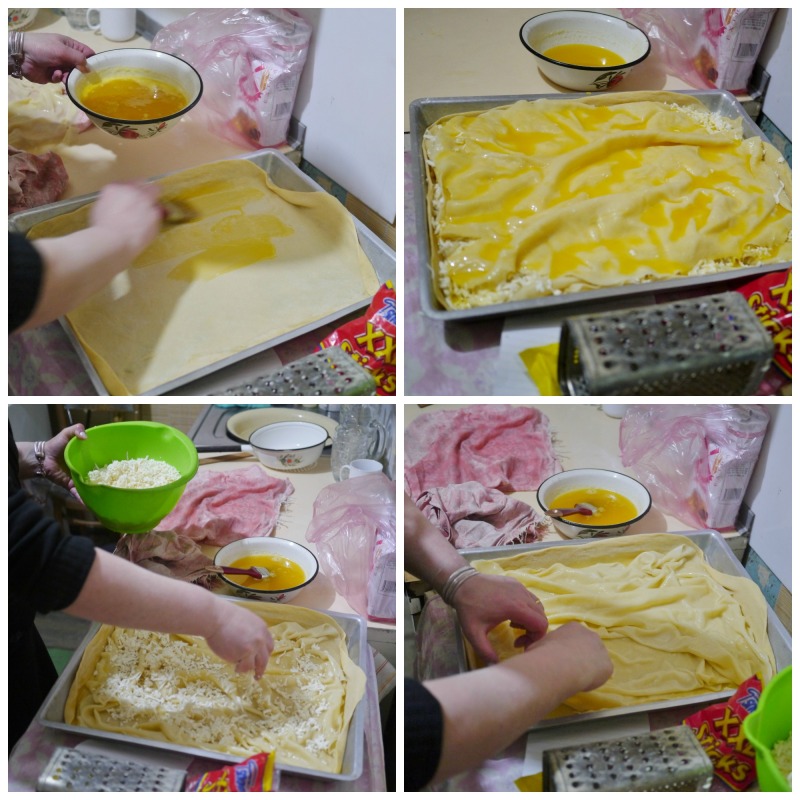 6.  Repeat with the next three sections of dough.  Finally, top it with the final un-boiled layer of dough, and brush with melted butter.

7.  Then, pre-cut the khachapuri into squares, because those bad boys are about to get nice and crispy on top. 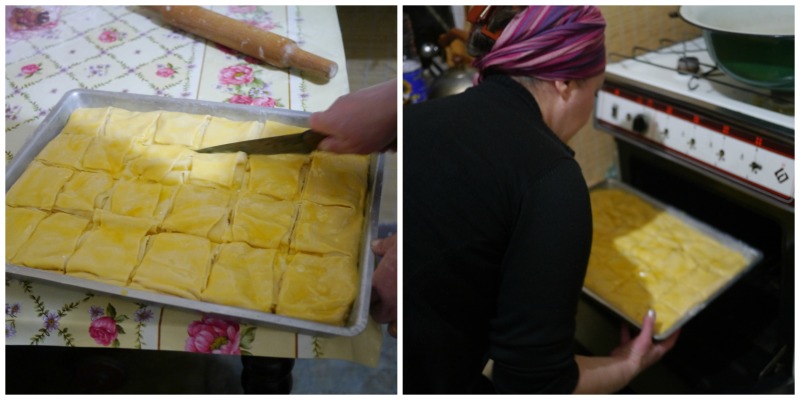 9.  Serve hot and eat your way to heart disease! 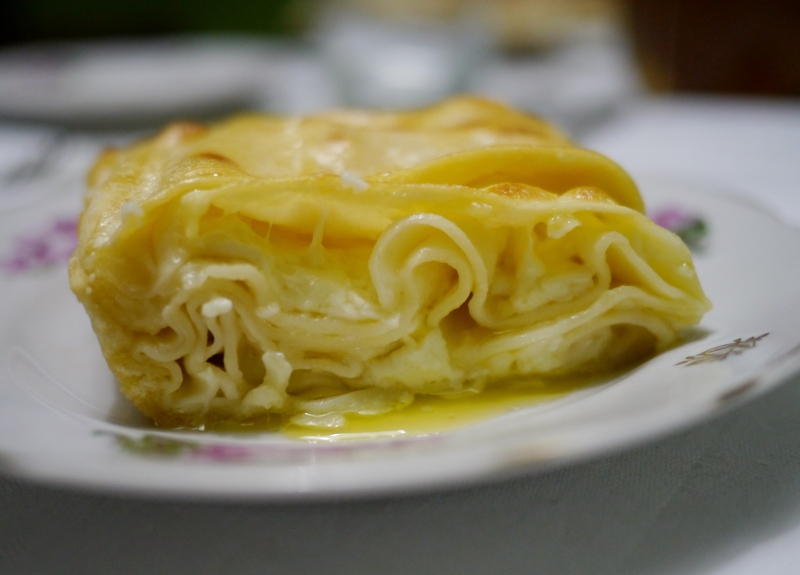 Again, my apologies for the missing details.  Once I gather them from my Georgian pals, I’ll fill them in here!

You can visit my friend Emma’s blog, Cookies and the Caucasus, for her own rendition of “Simplified Southwest Khachapuri”, and lots of great information about expat life in Georgia.

PS- My apricot nectar cookies are finished, but I don’t even want to eat them any more, because I licked too much cookie dough off of my fingers and lost my appetite.  Darn you, cookie dough!