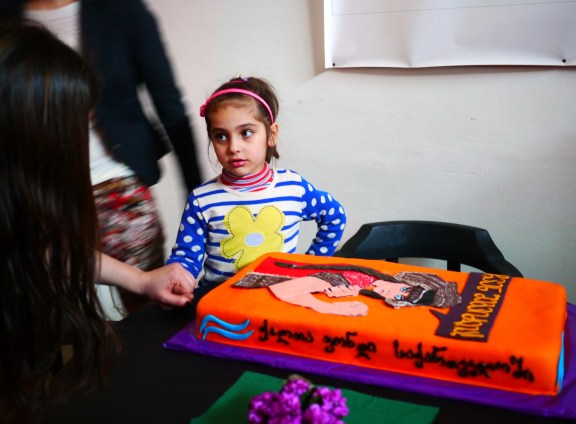 I live in a country that honors everything feminine.  Men speak about their mothers, wives, sisters, and daughters as saints and angels.  I haven’t had to open a door for myself in two months; I assure you that chivalry is alive and well.  On International Women’s Day, ladies were gifted with flowers, compliments, and gratitude in the streets, and some of my female friends even received Women’s Day bonuses at work.

I also live in a country where I was solicited as a prostitute within my first week (granted, I was standing alone on a street corner, but I wasn’t even wearing heels, dude).  Where women comprise 6% of Parliament and 11% of local government.  Where 92% of surveyed women in the rural region of Kakheti reported that they’d been victims of domestic violence in their lifetimes.1  I live in a country where gender roles are tacitly understood, and departures from these norms are not welcomed.

There are no easy explanations for the polarity.  You can chalk it up to Georgia being a traditional, patriarchal society.  You can write all the men off as sexists.  But that would be an unfair oversimplification, and we’d be overlooking so much of the progress that has occurred here in the past decades.

Compared with some of their conservative neighbors, Georgians are proud to be a more progressive country in the region.  In recent years, the government of Georgia has implemented campaigns raising awareness against domestic violence, and ensured “a more proactive implementation of the gender equality commitments laid out by CEDAW, Beijing Platform of Action, Millennium Development Goals (MDGs) Declaration on the Elimination of All Forms of Violence against Women (DEVAW), International Conference on Population Development (ICPD) Programme of Action.”2

Based on discussions with Georgian friends, my first impression is that they fear a western feminist agenda will eliminate the delicate femininity that they hold so dear, as well as their own identities as gentlemen.  Conversations about gender inequality need to be approached with careful attention to facts, to data, and to the mutual benefits that increased opportunity for women will provide people of any gender.  The goal is not to nullify femininity or masculinity, but rather to dissolve the cultural barriers that quietly prevent women from achieving their full potential as citizens and leaders.

I celebrated the 8th of March with the Women’s Fund in Georgia.  They debuted a documentary (aptly titled “Untold Herstories”) which told the stories of three relatively unknown feminists in the history of Georgia: Barbara Jorjadze, Ekaterine Gabashvili and Kato Mikeladze.  The evening included discussions by the film’s authors and actors and the Independent Group of Feminists on “Georgian Feminism Today,” henna tattoos, wine, and one of the most memorable cakes I’ve ever eaten.

1 2010 study conducted by the Anti-Violence Network of Georgia